Air Pallet Systems are designed to allow one person to move heavy loads safely and efficiently. The aluminum extrusion pallets utilize the efficiency of the proven fluid film technology to float the load over the surface on a thin layer of air.

Air Pallets are perfect for moving heavy bulky loads such as paper rolls, steel drums or other concentrated loads in warehousing and manufacturing applications. Automatic flow control valves compensate for offset loads and irregularities in the operating surface. 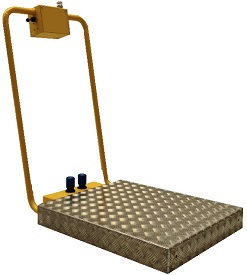 The film of air on which the Air Casters float provides omnidirectional movement capability that allows for exceptional maneuverability around sharp corners and within tight spaces. The low profile of the Air Pallet aluminum deck makes it easy to move loads in areas restricted by low ceiling and door heights.

SAFETY IS BUILT IN.

Air Pallet systems are safe for your operators to use. One pound of force exerted by the operator will move 1,000-lbs of load.

Utilizing the Air Caster Principal, an air film is created when compressed air is pumped into the circular Air Caster diaphragm and center plenum chamber.

When the air pressure in the Air Caster exceeds the weight of the load, air slowly and evenly escapes between the flexible torus bag and the floor surface to create a thin, friction-less film of air .003 – .005 inches thick.

Air Pallets with four or more Air Casters, are designed to operate under loads with similar dimensions. Air Pallets are ideally suited for small concentrated loads weighing up to 28,000-lbs.