Introduction
In a study performed by the Rochester Institute of Technology, manually operated, traditional I-Beam cranes were compared to Work Station Cranes (WSC) in relation to push and pull standards developed by Snook and Cirello (1991) for consideration by NIOSH. This study consisted of two parts:

Results
The first part of the study determined the gross force required by an average male and an average female to keep a load in motion (sustaining force) while safely performing work at a sustainable rate on both types of cranes. The graphs below illustrate the sustaining forces for the subjects. 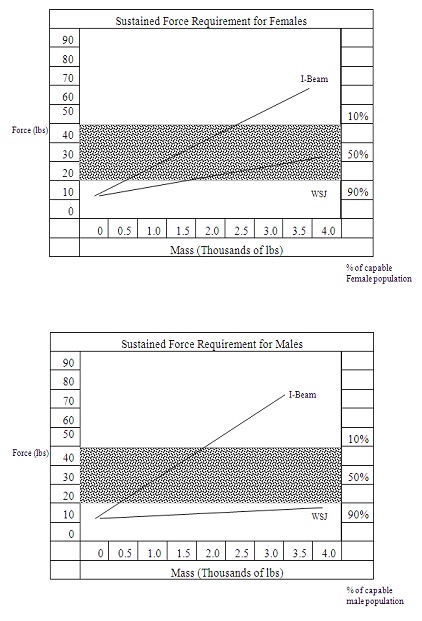 Comparing the sustaining forces with the proposed NIOSH guidelines, it was determined that:

Given the data, it is evident that only a small portion of the workforce can handle a 4,000 lb load on an I-Beam crane, while almost any worker, male or female, can handle 4,000 lbs on a Workstation Crane. Using WSC’s instead of I-Beam cranes results in a more flexible workforce and a safer work environment.

*Safe, as it is referred to above, indicates that a worker should not exceed 33% of his or her work capacity. It is an accepted ergonomic principle that the human body should not be required to work for extended periods of time in excess of 1/3 of its aerobic work capacity. Exceeding this level heightens the risk of chronic fatigue, a condition where the body doesn’t recover from the fatigue of one day’s work before the next day’s work begins. Chronic fatigue causes the overall work capacity of the worker to decline overtime. 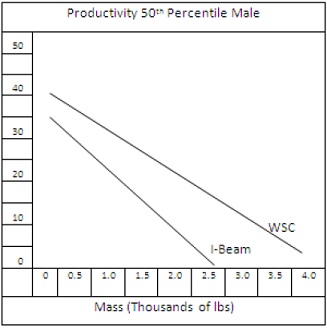 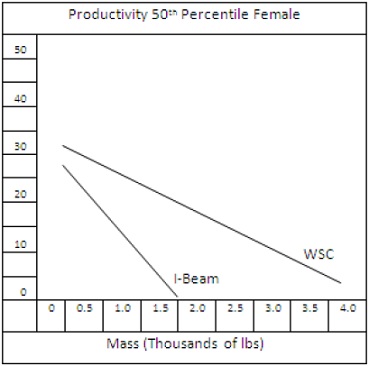 Results
This part of the study determined whether an economically significant difference exists in the amount of work that an individual can accomplish in a typical workday using an overhead crane versus an I-beam crane. By measuring an individual’s work cycles (moving and positioning a load over a measured path) and keeping work intensity at a constant rate via a heart rate monitor, productivity could be accurately measured. Productivity of the male and female subjects is illustrated in the graphs below.

Discussion – Part Two
Enhanced performance with a Workstation Crane results from the ease of movement associated with a WSC’s design. Reduced dead weight and a design superior to that of the I-Beam crane results in reduced coefficients of friction and lower initial and sustained movement forces that allows workers to position and move loads on WSC’s more easily than on I-Beam cranes. For example, moving a 500 lb load, subject’s averaged 7.5 additional work cycles with a WSC per ten minute time period. Translated to one hour, this would be 45 additional work cycles. Over a full eight hour work day, an average worker would complete approximately 360 additional work cycles.

The study revealed that workers using manually operated bridge cranes could safely handle significantly more weight with a Work Station Crane than with an I-Beam Crane. In the workplace, this translates into reduced risk of job related injury as well as significant increases in worker productivity.